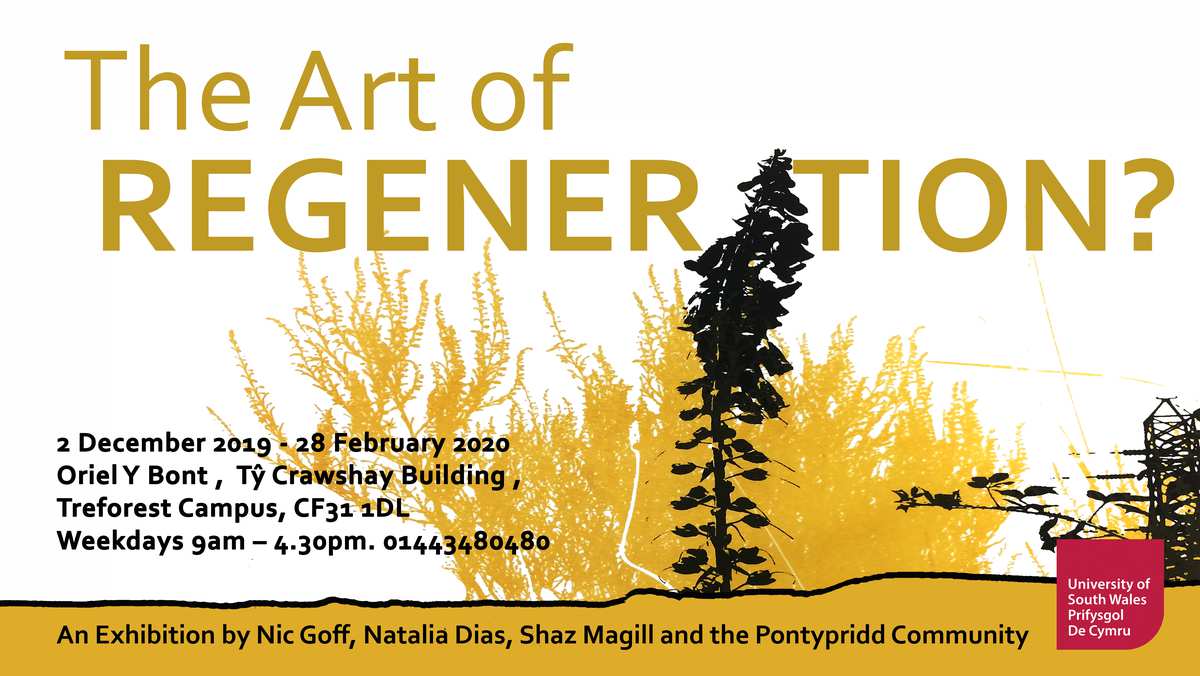 The ‘Art of Regeneration’ is a new exhibition looking at the changing environmental and economic fortunes of Treforest and the South Wales valleys. Artists Nichola Goff, Shaz Magill and Natalia Dias have worked with a variety of local community organisations to voice their experience of the changing landscape and their hopes for the future. The exhibition includes artworks from the University of South Wales Permanent Collection that reflect the scars of the industrial past and interactive elements by students studying Games Design.

You are warmly invited to the opening event for ‘The Art of Regeneration?’ on Wednesday 11 December 6 – 8pm

Treforest and the South Wales valleys have been subject to changing economic forces over the last two centuries. Transformed from a rural idyll the valleys became an industrial powerhouse before entering a period of post-industrial economic decline during the 1980s that communities, institutions and politicians have sought to counter. This together with the way attitudes and pressures on the environment have changed from the demands of unbridled exploitation to the need for sustainable development and conservation prompt the question: what is the art of regeneration?

To look toward what the future might hold for the region and what the changes taking place mean to people, artists Nichola Goff, Shaz Magill and Natalia Dias have engaged with a variety of local community organisations: Pontypridd Creative Writing group, children from Parc Lewis Primary School, Artis and the Crafty Cuppas. While creating their own objects and images using plants found growing on former slag heaps and printed with pigment derived from mining waste the community have also chosen artworks from the USW Permanent Collection that reflect the scars of the industrial past. These are shown alongside artwork produced by the artists and facilitators of the exhibition and interactive elements originated by students from Games Design.

The University of South Wales in its own history reflects the way the valleys have developed from dependence on heavy industry toward a diversified economy. The Treforest campus is located on the site of a former Tinplate works built by William Crawshay II, which in 1913 became home of The South Wales and Monmouthshire School of Mines before evolving into a polytechnic and then University, which is host to a multiplicity of disciplines from Advanced Technology, Business and Society to Health and Life Sciences and Creative Industries.