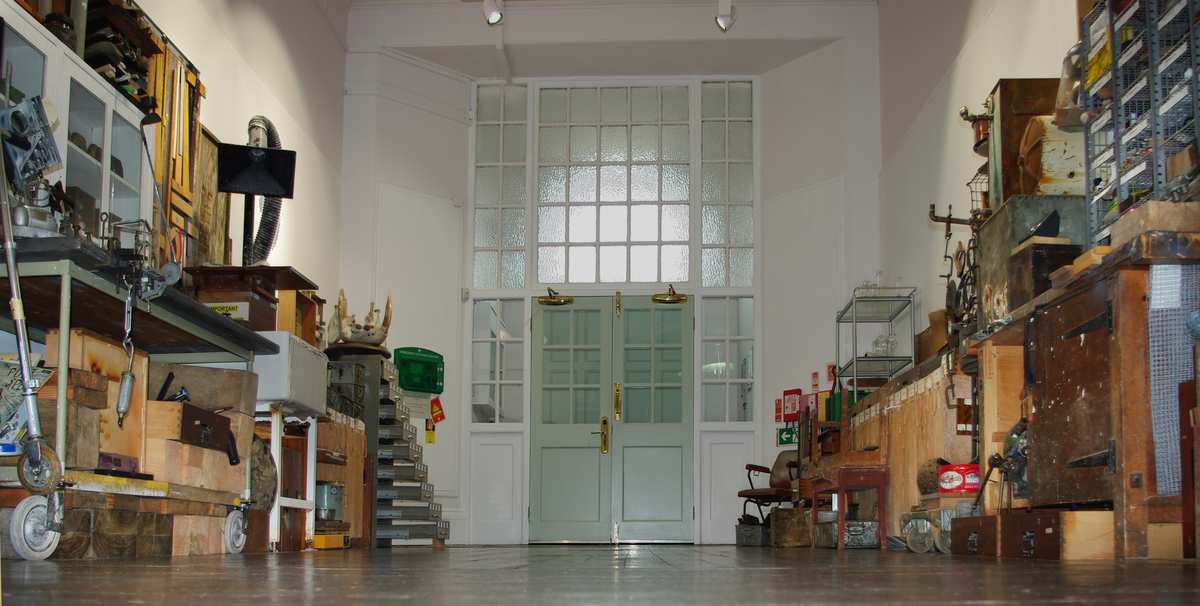 'The Periodic Table’ is an installation by Nigel Talbot who specialises in working with salvaged material. Key to the work of Nigel Talbot is ‘materiality’; the way a material carries a host of associations such as the hermetic or clinical nature of glass or the history encoded in the substance and surface of a used chunk of wood or metal.

In this instance the materials are drawn from the University of South Wales’ sculpture workshop, which is being decommissioned. The sculpture workshop has always provided a treasure trove of material inspiration for students on art courses. The exhibition acknowledges the way an institution such as a University evolves and the way buildings are re-purposed. For instance, the Treforest campus is located on the site of the former South Wales and Monmouthshire School of Mines. Nearby, Pontypridd Museum holds old newsreel footage of students at work in the 1950’s forming glass laboratory equipment in the rooms adjacent to Oriel Y Bont in Ty Crawshay Building, which before it became the School of Mines was the home of the Industrialist Francis Crawshay and the site of his tinworks. 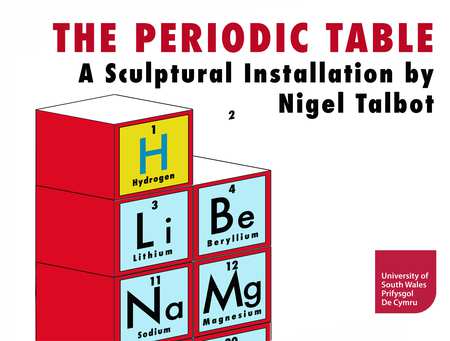 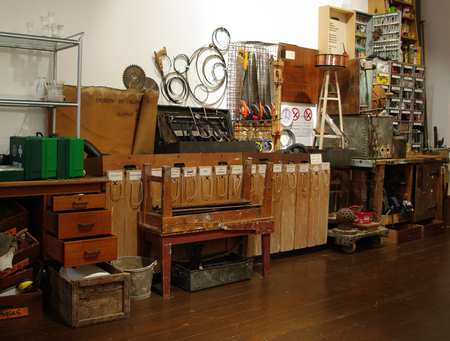 In borrowing the term ‘The Periodic Table’ from Mendeleev’s organisation of the elements by atomic weight, the exhibition takes a lead from the Italian writer and chemist Primo Levi, who uses the chemical elements as metaphor for life experience and the human condition. In the opening chapter, entitled Argon, Levi compares his Jewish ancestors, for their ability to retain their distinct identity, with the noble gases, which do not combine or react with other elements. Both the book and exhibition celebrate the magic of transforming base elements into new matter fulfilling the ambition of the alchemists but not in the way they imagined.

The exhibition also includes contributions from invited artists, staff, alumni and students of creative writing who have been commissioned to respond in kind 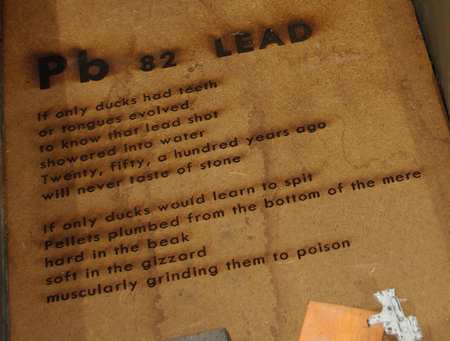 Maria’s debut novel, The Chicken Soup Murder, was a finalist for the Dundee International Book Prize, shortlisted for the 2018 Rubery International Book Award in the fiction category, and runner-up in the 2019 Dorchester Literary Festival Local Writing Prize.  Maria’s books are available from your local bookshop or online from www.serenbooks.com, Amazon and Kobo. 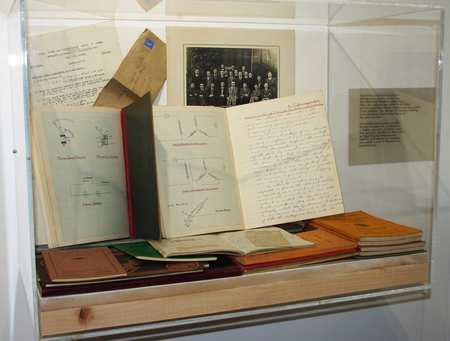 Engineering journals belonging to Stanley Crompton BSc dating from the 1940's when he was a student here. then the institution was called South wales and Monmouthshire School of Mines and was located in Ty Crawshay building. You can see Ty Crawshay building in the background behind the figures in the group portrait. 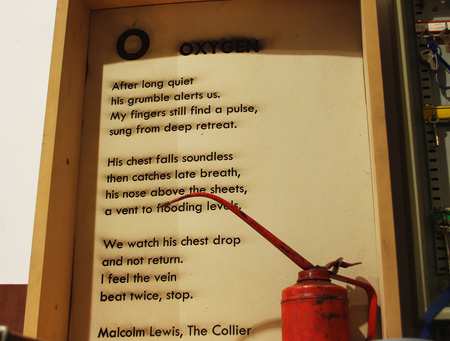 Malcolm Lewis is from Caerffili. He is a freelance writer, editor and arts journalist. He is the film critic for New Internationalist and was for many years music columnist for Planet magazine. He’s published poems in many magazines as well as an illustrated pamphlet, The Hard Man (Mulfran Press).

Detail from The Periodic Table 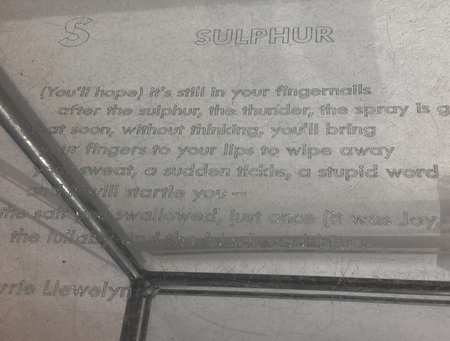 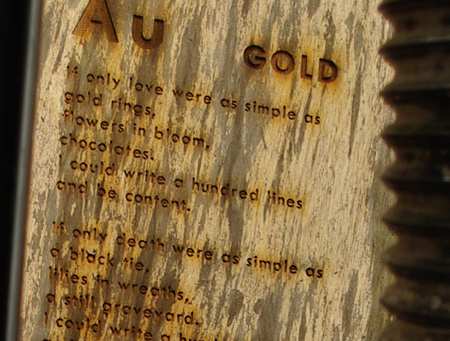 Cerys Jones is Principal Quality Officer at USW. She completed her Masters in Creative Writing – at the University of Manchester and was Runner up in The Welsh Poetry Competition 2007.

Luz Erika Chick completed the BA Art Practice at the University of South Wales in 2016. She was awarded Arts Council of Wales, Brian Ross Memorial Award and the Branwen Thomas Memorial Award in 2016.

Jason Glover, 51 is a former teacher and administrator, who is currently painting the hall 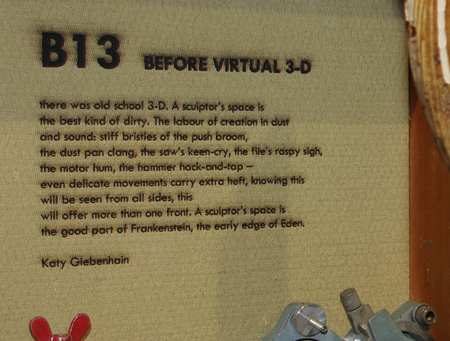 Katy Giebenhain is the author of the poetry collection Sharps Cabaret (Mercer University Press) and the poetry chapbook Pretending to be Italian. Her BFA is from Oregon State University. Her MA is from University of Baltimore. Her MPhil is from University of South Wales. Her current focus is on arts responses to the access to essential medicines crisis in the U.S. She works for the Carroll Community College Foundation. Along with Marty Malone and Alan Bogage she co-hosts a monthly poetry series at The Ragged Edge Coffeehouse in Gettysburg, Pennsylvania. 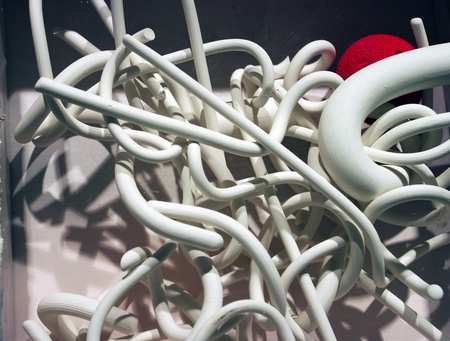 Marina Iodice completed the MA Arts Practice, Fine Art at the University of South Wales in 2019 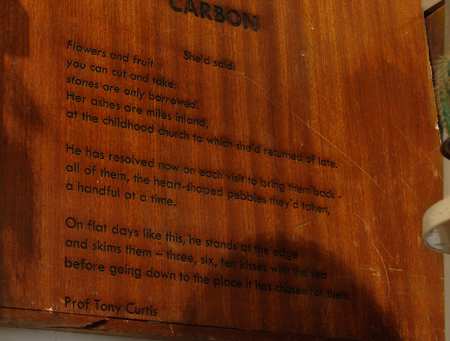 C  Carbon   (from Returning the stones)

Tony Curtis was born in Carmarthen in west Wales in 1946. He studied at Swansea University and Goddard College, Vermont, and is the author of several collections of poetry, including War Voices(1995); The Arches (1998)  Heaven's Gate(2001) and Crossing Over (2007). He has also written books of criticism, including How Poets Work (1996), Welsh Painters Talking(1997), The Art of Seamus Heaney (1982) and Dannie Abse (1985). He is the editor of several books, including The Poetry of Pembrokeshire(1989); The Poetry of Snowdonia (1989) and Coal: an anthology of mining (1997) and The Meaning of Apricot Sponge: Selected Writing of John Tripp, 2010. Tony Curtis is Emeritus Professor of Poetry at the University of South Wales where (as the University of Glamorgan) he founded and directed the M. Phil Writing course. He won the 1993 Dylan Thomas Award and a Cholmondeley Award in 1997.and was awarded a D. Litt in 2004. He has toured extensively in Europe and the USA giving poetry readings and lectures. He lives in Barry, Wales.